Fried rabbit was a staple in the hill country of West Virginia from the time the area became populated until the mid-twentieth century.
The hills and hollers are filled with an abundance of game, but rabbits are especially plentiful.
Young boys learned to catch this game before the age of ten using simple snares and box-traps.
These traps were simply constructed, and many times were the young boys first attempt at woodworking. 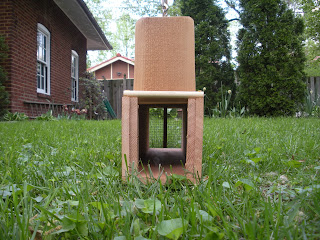 Game is lured into the trap by the scent of food [usually apples or carrots for attempting to catch rabbits].
As they enter, to reach the food, a prop is simply knocked out of place by the animal and the door to the trap slams shut, trapping the animal inside. An opening on the opposite end can allow for dispersing of the animal without even removing it, or it can be pulled out through the original trap opening and dispersed.
The carcass was then brought to the kitchen door for "Mom" of the house to clean and prepare for eating.
I won't go into the proper method of cleaning and butchering a rabbit carcass at this time... although we may look at that at a later date!
Once the animal was butchered, mother was left to either "put it up" [usually canning the cooked meat], or fixing it right away.
The animal would be allowed to soak for several hours in a salty brine to help take away some of the "gamey" flavor attached to it. [Believe it or not... if the rabbit has been eating wild onions... you'll know it when you bite into the meat!]
Then mother will par boil this meat to make it tender.
Simply placing the meat in a large pot of boiling salt water and allowing it to boil for about 30 minutes will remove any remaining gaminess, and tenderizes the meat should it be tough.
The pieces of meat [which strangely enough resemble the carcass of a chicken!] are then lightly disted with cornmeal or flour, dipped in egg and milk and rolled in flour. [The first dip allows the remaining two to adhere well to the meat.]
Next a large, heavy skillet is prepared with a generous amount of lard for cooking. When it is brought to a medium/hot heat, the pieces are then dropped into the fat and fried until golden brown. 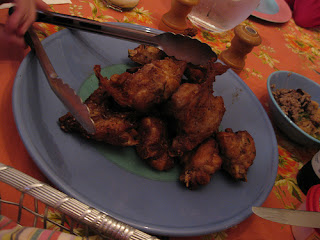 A delicious brown gravy is then made from the pan drippings.
Served with biscuits, this is a meal unto itself! And it is highly favored, even today, in the hills!
And everywhere!!!
Squirrels are caught and cooked in a similar fashion.
In this manner, young boys learned early how to provide for their families. They also provided their family with fish... but that is for another day!
Posted by Cyndi Beane Henry at 1:00 AM

I made rabbit stew last week, but I didn't have to catch it! It must be popular all throughout the entire Appalachian range, from north to south. I'm in New Hampshire.